Solution home How to StorageOS 3

The recommended number of disks in a data disk group, that may allow only 1 failing disk before losing data, is between 3 and 9. For a large number of disks on the system, for better performance, try using more groups. For large space requirements, you may take into consideration using more disks per group.

The available disks for creation are listed in the disks section. Disks allocated to disk pools are blue-labeled with the name of the pool and cannot be used in a new disk pool. Available disks are gray-labeled as available.

To create a new disk pool, go to the Disk Pools menu and click on the Add button in the upper right corner and a new pool configuration menu will appear: 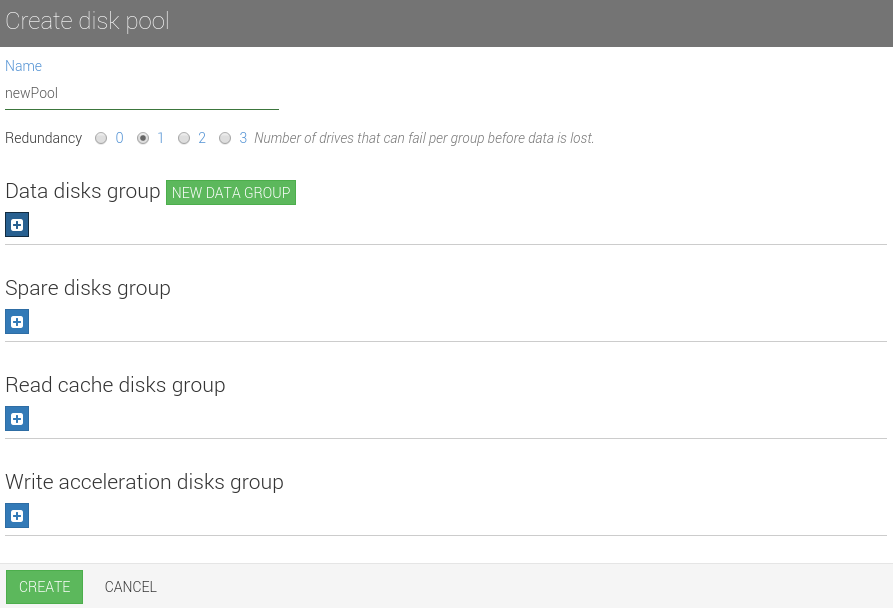 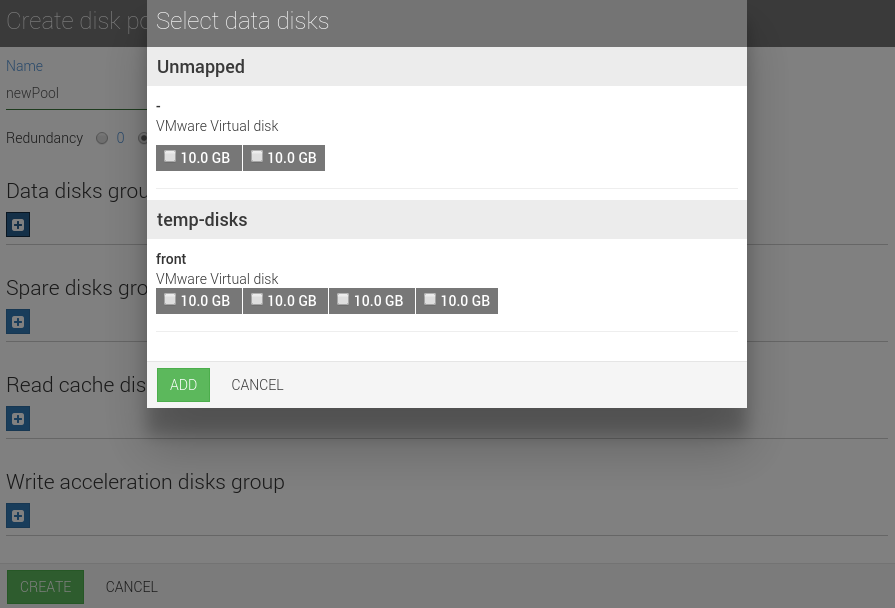 NOTE: All disks in one disk pool group must have identical sizes! After adding the first disks, only disks of the same size can be added.

If the disks have been used previously in another disk pool, you will need to force creation.

NOTE: Disks are grouped by controller name. If you have more than four controllers, you may choose to create multiple data disk groups that do not have more than two disks from the same controller. This way you can create a pool that is immune to controller failure in addition to disk failure.

When you have completed your desired configuration you can finish the creation by clicking the Create button or you can cancel the operation by hitting the Cancel button on the bottom of the page.

Disk pools used in High Availability clusters will be marked when listed.

You can initiate an integrity checking procedure by clicking on the contextual menu Check integrity button. You will then have the possibility to start or schedule integrity checks. 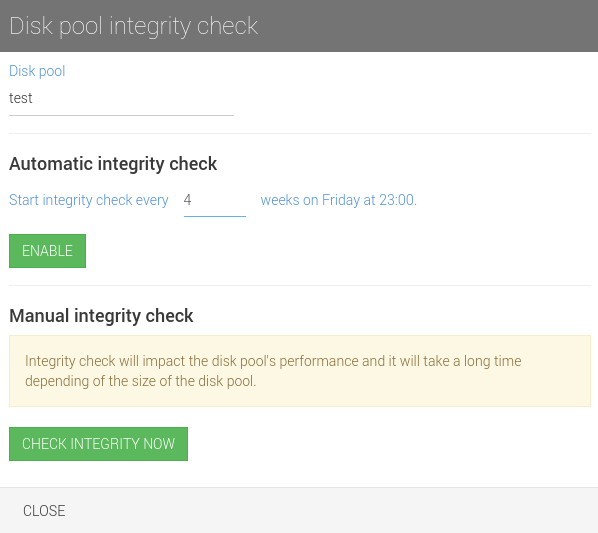 NOTE: Doing regular integrity checks is strongly recommended, but be careful not to initiate them when storage is under load – it can affect performance and take a significant amount of time, based on the pool size. Also take note that if any changes occur in pool structure (disk replacement, fail etc.) a regenerating procedure will initiate – it is an operation similar to the integrity check, also affecting the pool performance.

The true power of pools comes into action when one or more of your disks fail. According to your disk pool configuration, a certain number of disks may fail before data loss.

When replacing a faulted disk make sure that the replacement disk is of the same size as the one faulted. To replace the faulted disk take the following steps: 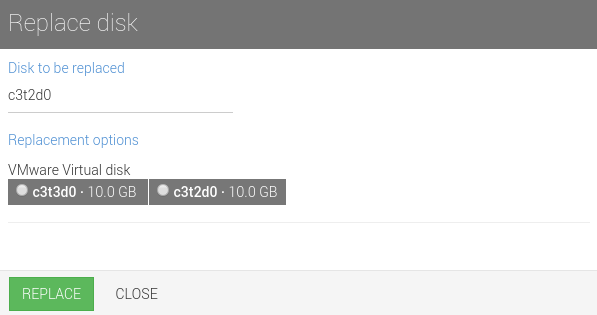 4. Click Replace and once the operation is completed make sure that you also replace it physically with a healthy disk.

All the conditions from 3. apply here. To replace the system disk, follow these steps:

Occasionally, you might need to move a storage pool between systems. To do so, the storage devices must be disconnected from the original system and reconnected to the destination system. This task can be accomplished by physically re-cabling the devices, or by using multiported devices such as the devices on a SAN. ZFS enables you to export the pool from one machine and import it on the destination system, even if the system are of different architectural endianness.

To export a pool, navigate to the Disk pools menu. Click the Contextual menu > Export button on to export the disk pool. The pool on which the system is running, usually named rpool, can not be exported.

After exporting a disk pool, the data is no longer accessible. Reimport the disk pool to regain access to your data.

Navigate to the Disk pools menu. Click the Import an existing pool button. If there are disk pools that can be imported a list will be shown. Select the disk pool to be imported an click Import.

If a disk pool was previously used in another machine, you will need to force import it. This option will be proposed to you when clicking Import.